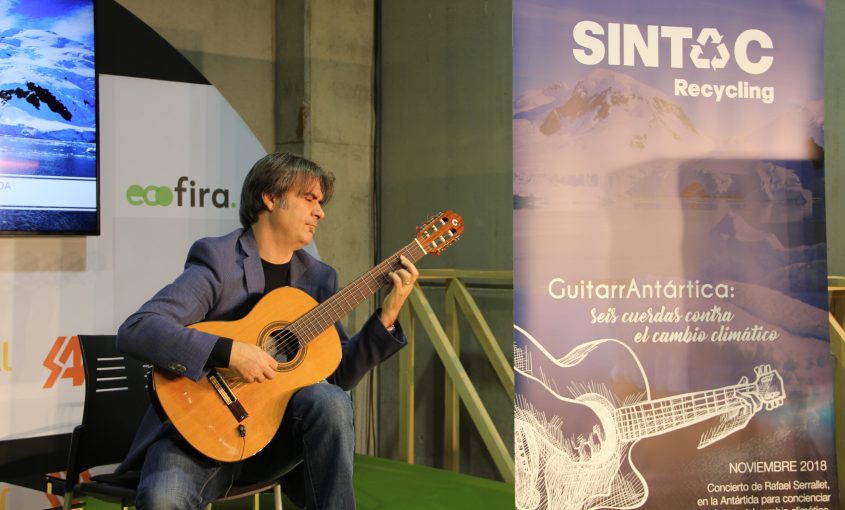 The famous Valencian guitarist Rafael Serrallet, with the support of SINTAC RECYCLING, travelled on Sunday to the Antarctica to become the first classical musician to play within one year in the 7 continents. The purpose of this project is to raise awareness about the problems of climate change.

SINTAC RECYCLING, the leading company in the recycling of plastics, presented at the 2018 edition of the Trade Fair ECOFIRA in Valencia its GUITARRANTÁRTICA project. The project aims to raise awareness through Spanish music, the classical guitar. The Valencian guitarist Rafael Serrallet, recognized at an international level, is committed to increase consciousness on the effects of climate change. To pursue his goal, the guitarist departed last Sunday to the Antarctica, where he will perform, in front of the glaciers, the well-known piece of classical guitar, El Concerto de Aranjuez. With this trip, Serrallet will become the first classical musician in the world to join the Guiness Book of Records for playing on all continents within one year.

SINTAC RECYCLING, along the same lines, will publish a video with classical music and images of glaciers and Antarctic landscapes, to raise awareness of the serious effects of climate change.

The CEO of SINTAC RECYCLING, Vicente Olmos stated “for a company like ours that has been recycling for many years, it is very important to support projects that promote the circular economy and the protection of our planet. That is the main reason why, it is an honor to collaborate with such a well-known guitarist like Rafael Serrallet”.
The collaboration will foster the project that aims to increase consciousness about the consequences of global warming and the environmental detrimental.

According to Rafael Serrallet, “this challenge has been possible thanks to the support of committed companies such as SINTAC. I intend that music serves as a universal language to break boundaries and carrying the message of the importance of preserving the ecosystems of our planet”.

After the trip, charity concerts will take place in various parts of the national, European and global geography, which will pursue increasing the sensitization of society on matters as Sustainability and Ecology. Moreover, it will also serve to raise funds with which finance future projects on the fight against climate change.

In accordance with the provisions of current regulations on Personal Data Protection, we inform you that your data will be incorporated into the treatment system owned by SINTAC RECYCLING, S.L. with CIF B98219074 and registered office at C / NUMERO 112, 47 46182, LA CAÑADA (VALENCIA), in order to answer your questions and send you related information that may be of interest to you. In compliance with current regulations, SINTAC RECICLING, S.L. informs that the data will be kept for the period strictly necessary to comply with the aforementioned precepts.

While you do not inform us otherwise, we will understand that your data has not been modified, that you agree to notify us of any variation and that we have your consent to use them for the aforementioned purposes.

SINTAC RECYCLING, S.L. informs that it will proceed to treat the data in a lawful, loyal, transparent, adequate, pertinent, limited, accurate and updated manner. That is why SINTAC RECYCLING, S.L. undertakes to take all reasonable measures so that these are removed or rectified without delay when they are inaccurate.

In accordance with the rights conferred on it by the current regulations on data protection, you may exercise the rights of access, rectification, limitation of treatment, deletion, potability and opposition to the processing of your personal data as well as the consent given for the treatment of them, directing your request to the postal address indicated above or to the email info@sintac.es

In turn, we inform you that you can contact the Data Protection Delegate of SINTAC RECYCLING, S.L., by writing to the e-mail address dpo.cliente@conversia.es or by calling 902877192.

You can contact the competent Control Authority to present the claim that you consider appropriate.

Strictly Necessary Cookie should be enabled at all times so that we can save your preferences for cookie settings.